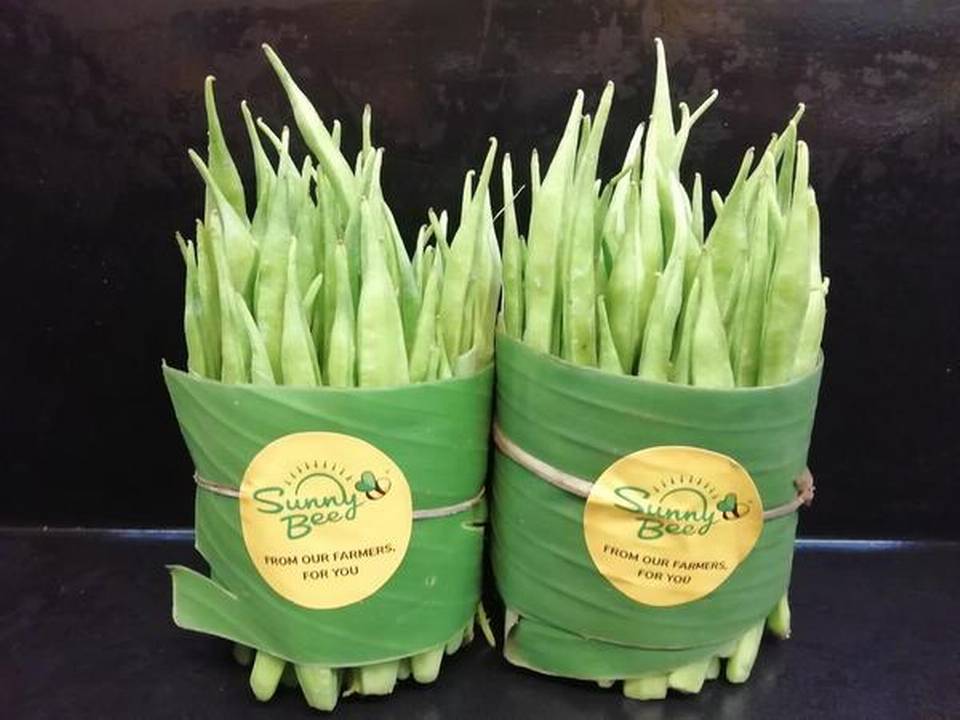 Taking a leaf off Instagram, SunnyBee is using a simple alternative to plastic packaging
Coconut leaves are too rough; palm leaves are too scratchy. But banana leaves are just right, says SunnyBee retail chain founder, Sanjay Dasari. “We tried a variety of leaves before zeroing in on banana ones, as packaging material. They are soft, they contain moisture that helps keep other produce fresh, and they’re easy to wrap with. It also helps that they look really pretty,” he says.
But using banana leaf as an alternative for plastic bags and rope when selling vegetables and fruit, is not an idea that SunnyBee can take credit for. They don’t intend to, either: Sanjay describes the step as a result of “a flood of suggestions”.
“We received messages on Facebook and Instagram and were tagged by a number of our customers on posts and stories,” all of which led to one shop in Thailand, which has been going viral for weeks, because of their use of leaves to tie up produce. It is a simple, straightforward, indigenous alternative and for SunnyBee, it is also very cost-effective.
The company’s business-to-business branch, Waycool, supplies banana leaf plates to a number of restaurants and other clients around Chennai and other cities. “We get the leaves from the farmers who supply us banana,” explains Sanjay, “They are cut into various set sizes before being sent to the clients, and a number of strips and pieces are left behind. These usually go waste, but now we use them for packaging.”
The initiative is two weeks old and currently restricted to two SunnyBee outlets in Chennai — Palavakkam and Sholinganallur. “We can’t use them to wrap the produce after weighing and billing, because it would hold up the billing line. So we have to pre-wrap the produce. We are still trying to figure out what the optimal quantities are: what weight our pre-packed bundles should be, so that customers can pick up what they want to buy without having to look for larger or smaller bunches.”
And that brings the conversation back to customer feedback. For the banana wraps, Sanjay says the response so far has been mixed. “A lot of our customers suggested this, and a lot of those who didn’t know about it are also happy. But there are still a number of people who demand that we stock plastic bags,” he says.
And then there are those already armed with a fresh lot of suggestions. Most of these come through the store’s social media handles, which Sanjay has been manning since the early days of the firm. He intends to continue to do so, and sounds almost smug as he says, “Our customer feedback is one of the most aggressive parts of the job.”