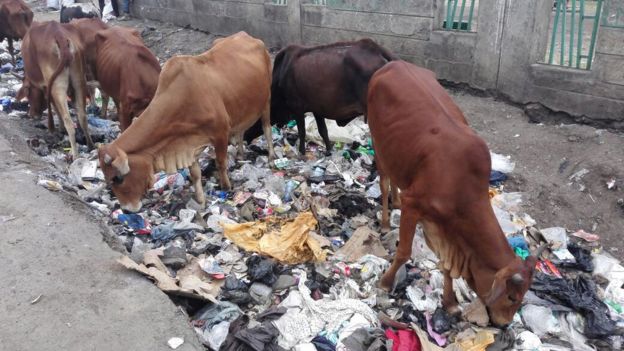 At least 30 kilograms of plastic can be found from the stomach of every cow or buffalo which dies in India, Union Environment Minister Prakash Javadekar said , adding that a ‘plastic carry-bag free India’ campaign would be soon launched.

“The problem with India is we have laws but we don’t implement them,” he said while interacting with walkers at KBR Park here as one of them expressed concern over plastic waste. He noted that plastic bags below 40 microns are banned and rag pickers do not take them as they cannot be recycled and are ultimately strewn all over the place.

“Every day, 15,000 tonnes of plastic waste is generated in the country. Only 9000 tonnes (of the total) get collected. So we have plastic heaps…all over the villages also. They will remain there for hundreds of years like carbon dioxide”, the Minister said.

“Now, every cow or buffalo which dies in India…in its stomach…one can find at least 30 kg of plastic. It’s a huge thing,” he said, highlighting the severity of the problem at hand.
Javadekar said a “plastic carry-bag free India” public campaign would be launched with stricter law enforcement and punishment, surprise checks and raids on illegal manufacturing units.
He said the Government has also decided to launch an urban green campaign aimed at creating more carbon sinks and greenery in partnership with town planners and people.
The idea is to create more lung spaces for cities, theme parks and memorial gardens, wherever possible. The objective is to make people partners in every endeavour, he said.